The Crystal Peat Conservation Area is a 30.5 acre parcel at the northern part of Cook Road. The land was donated to the Town of Tolland by the Crystal Peat Humus Company, Inc. (the Roncari family) in September of 2013.  The property lies along the east side of the “old Cook Road”. This road used to be the connection to Ladd Road and Route 140 in Ellington. On the west side of the discontinued old Cook Road, is open space leading up a steep hill.

The terrain of the land is very flat. Most of the north and east sides of the area are wetlands, especially in the peat bog area and near the brook. In the middle of the property, there is a 0.3 acre pond surrounded by heavy undergrowth. Brooks Brook starts on this property and flows south, joining the Skungamaug River just before entering the Charter Marsh.

This property was used many years ago to produce peat. A drainage ditch was dug around the perimeter and drained to the low side of the bog. The surface vegetation was removed. To reduce the moisture in the top layer of the bog, shallow parallel ditches that drain into the perimeter ditch were dug. This allowed the surface to dry enough that harvesting equipment could be used without fear of sinking. The fields between the parallel ditches were then profiled so that rain water would drain to the ditches. Production required the use of the sun and wind to dry the surface peat layer. An uppermost layer was usually harrowed, breaking capillary flow and enhancing the drying process. The dry peat layer was then collected and transported to a processing facility for screening and packaging. There remains a tall wall, that was used to load the peat for shipping, and two rectangular foundations. 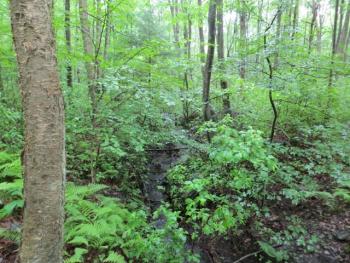 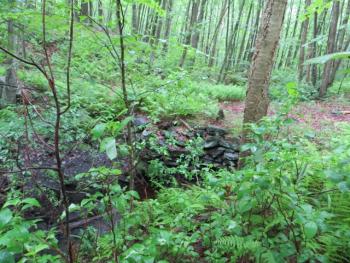 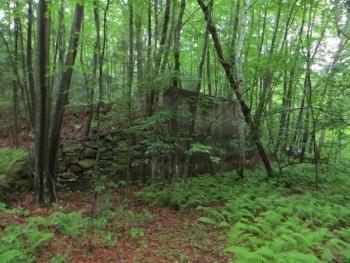 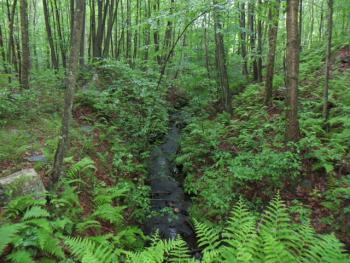 More pictures are on our Crystal Peat Facebook page.